“Having Juliana as my writing counselor was simply amazing. I struggled with many learning disabilities at the time, and she created a very safe space for me to work with what I called ‘my horrible writing.’ I never thought of our meetings as work because she help me describe my passions in words.” 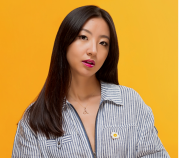 “Juliana was my favorite writing mentor during my two years of graduate school at MICA. As an international student dealing with graduate level liberal arts articles, the struggle was real. Juliana was very patient and able to connect with her student, which makes the learning experience not only easier but also a lot of fun. With her charming personality as well as broad knowledge of art, she has helped me build my initial confidence in a foreign country with language, and that has continuously served as an important foundation for my later career success.”

-Dingding Hu, creator and designer of Hu is Hungry

“Juliana’s tutoring advanced my writing from okay to fantastic. Each session with her resulted in immediate, concrete improvements. She gives constructive feedback in a sincere, personable way. I’d be a crap writer without her help!”