I was inspired to write about depression around the holidays after I heard that a friend’s teenage son has entered the hospital for compulsive cutting. I wrote her an email, but it made me think about this subject more, especially after having recently read my adolescent diaries. And if I can make this holiday a little easier for someone by identifying with their baffling struggle, I could ask to give no greater gift for Chrismahanukwanzaa.

When I was in high school, I wanted to write an article about the high suicide rate among teens during the holidays. I wanted to highlight how common this is, how there are some people at risk during this time, and that not everyone experiences the holiday the same. To be gentle with those people, stop calling them Scrooge, stop making them feel worse. I had some statistics I found online of how many teens commit suicide during the holidays vs. other times of the year. It was staggering. It scared me and emboldened me to expose it within my own community.

The problem was, my only available interview subjects were other students attending my nice, semi-religious private school.

I thought for sure that my closest female friend at that time, who was as hyper-critical of society as I was, and who loved dark, scary punk bands and guys with dark makeup–surely she would corroborate this story. But when I interviewed her, I learned a whole lot more about my friend–and the goth scene–all at once.

I asked her very leading, pointed questions like, “How is your mood generally around the holidays? Do you ever find yourself thinking more about death? Do you become more introverted or brooding when the days get shorter?”

Her answers astounded me–she said she liked the cold, liked being all bundled up. She loved Christmas, her family had fun traditions, Santa came and visited their street, and it was a magical time of many gifts and funny movies with eggnog. 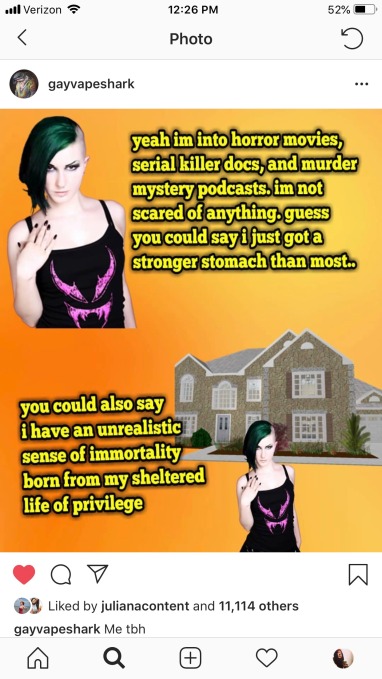 [I visited her house late January one year, and was even more baffled to see many of these very expensive gifts still in their original packaging, stuffed in a corner or still sitting where they were opened.]

When I tried to interview someone else, I asked even more leading questions: “Do you ever feel sad around the holidays? Is it hard spending lots of time with family in close quarters? Do you ever wish school would start up again just so you wouldn’t have to pretend to get along with your parents?”

At that point, a boy with whom I had a will-they-won’t-they combative relationship, stage-whispered to my interviewee, “PSST: She wants you to say you’re depressed!”

I gave up the interview with a “thanks a lot” or something. I knew he was right, and that I was not exercising good interviewing techniques. I was chasing the story I wanted, not the story that was there.

But it also revealed another truth: that I was desperately seeking others with my experience. I needed someone to relate, because otherwise I was just a hopeless case of stick-in-the-mud Scroogeness.

The completed article could be summed thusly:

No one at my nice private school feels depressed around the holidays (because they have everything). But many other teenagers experience a sharp downtick in mood…they’re out there. You got at least one here.

I cited a few statistics of teen suicide around the holidays, but that boy’s comment had cut to the quick. Yeah, I was leading my subject, but I was also asking, “Are you at all like me?”

When I look back on that time now, having lived another 15 odd years with this illness, I can see so clearly all the landmines to my mood. Hindsight is 20/20, but especially after leaving my sheltered, privileged community and making greater contact with the world, I came to realize my struggle was not only not unique, but a downright clichê.

So it’s a clichê. That just means lots of other people experience it. And that means there are patterns to look for, and ways to help your teen smooth out the harsh experience of just being alive. Let’s take a look at some of the common stressors being thrown at the average adolescent around the holidays.

Holiday Triggers for a Teen:

We are animals of routine, and teens are busy learning how to keep up with that more-adult routine of school responsibility, social tap-dancing, and family obligations. When school is out, the daily structure falls apart. This is only after a few months of just getting back into the swing of school after the summer. Face it: changes in routine mess up our sleep schedule, our level of activity, and therefore our mood. To say nothing of the fact that we all tend to be more sedentary in the winter.

Then add to that the amount of stress from the semester, having played Fall sports maybe, and now suddenly the activity is dropped back, they’re not seeing their friends, and it’s just the Parents Show 24/7.

Sorry, if your teen is depressed or anxious around the holidays, it may be your fault. That is, teenagers are still children, and like emotional sponges. Your anxiety over getting the house clean, getting to church or parties on time, giving gifts, living up to others’ expectations, and possibly ending the year broke from the holiday prep, may be transferring to the kids.

You’re running around trying to make everyone in your family happy at once, and you have zero time for Little Miss/Mr. Scroogitude. But it’s worth taking a moment to recognize your own stress level, and how it may be affecting others’ enjoyment of the holiday.

When your teen is sullen or hostile, rather than that knee-jerk reaction of describing how awful they are being (they know!), try asking, “What’s going on? What’s bothering you? How can I help alleviate this bad feeling for you?”

What if you said, “This is a stressful time, huh? I feel a lot of stress to make everything great for all of you. I’m working on handling that, but it’s a lot, you know? I know you’re going through a lot too. We’re in this together.”

Teens, like children, push boundaries. It’s natural, and part of growing up and becoming an independent human. It means you’re doing your job. But show them how to react when someone is pushing buttons. Answer with kindness, invite them to describe exactly how it feels to be inside their mind. Maybe they’ll come to you next time, instead of bottling it all up and letting it implode. 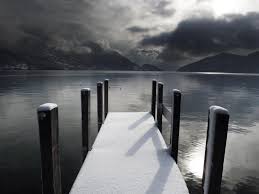 I woke up to this NPR article about how scientists think they may have discovered a neural pathway connected to the retina that affects mood, based on amount of sunlight exposure. Don’t just say, “Everyone gets sad when it’s dark and cold.” First of all, it’s just not true. Otherwise no one would live in Iceland, Alaska, etc. And those places rock. Second of all, if there is indeed a biological basis for this phenomena, then there would be variations in sensitivity, person to person.

In other words, the depressed teen in the winter may not be so depressed in the spring, OR the depressive gene has found the right circumstances to present in the young person.

Note: If an adolescent feels glum and bored in the winter, they might just need to get outside more, or get a SAD lamp which are way less expensive and much smaller than they were when I bought one in 2001.

BUT if you (if you’re a teen reader, hi), or your teen begins self-destructive behavior, drinking alcohol, or physical self-harm, you need to seek help right away. Major depression from a chemical imbalance can move faster than anyone around that person can tell. [Sidenote: The whole “cutting for attention” thing is harmful to at-risk people. If someone is cutting themselves, they NEED attention, and shame on everyone who ignores it as a performance. Performing that behavior is itself of concern.]

These are the Big 3, as far as I’m concerned, because any one of them on their own would affect an otherwise healthy adult. But there are many other stressors on teens, like grief at missing a parent or other loved one, all that time to reflect on social stress at school, transitioning genders or other body changes; new school, new home, new baby.

A teen is midway between child and adult. So while they may know a lot of adult things and ways of expressing themselves, their bodies and brains are still developing and becoming. They need hugs, and to be told that they are still wonderful, and always loved no matter how badly they feel.

If you’re a teen reading this, I see you and feel you. Here’s to ending the stigma against depressed teens!